After a light freeze on the final day of the workweek, slightly warmer temperatures are expected in advance of the next front. That system puts rain in the forecast for Sunday.

Tonight & Tomorrow: Another chilly night is ahead thanks to mainly clear skies and light winds. While freezing temperatures were realized last night, low temperatures will take a dip below average but stop in the upper 30s and low 40s. Saturday will warm into the upper 60s. The afternoon is expected to stay dry but clouds will increasingly mix out sunshine as the day progresses.

Up Next: Rain is set to return for the second half of the weekend. A stalling front will move into the region on Sunday and bring periods of rain and a few thunderstorms. No severe weather is expected but some brief downpours will allow a widespread inch of rain. A small pocket of two or three inches is possible, especially north and west of Baton Rouge. If it comes in a short time these amounts could cause some nuisance street flooding, but any problems would be very isolated. With that front meandering near the coast through Wednesday, scattered showers will likely remain in the forecast. However, none of the first three days of the week look like washouts and will in fact stay dry most of the time, just with a lot of cloud cover. Temperatures will be a bit warmer than average due to a moisture rich air mass staying in place along the front.

Detailed Forecast: A surface high pressure system will slide east toward the Mid-Atlantic through Saturday. Clear skies and relatively light winds will result in another chilly night, but higher dew points will keep thermometers away from freezing. Winds will turn onshore coming out of the southeast guiding warmer temperatures and rising dew points (moisture). A stream of moisture in the subtropical jet stream riding across Mexico to the central Gulf Coast will allow some mid to high clouds to appear through the first half of the weekend. There will be a substantial increase in atmospheric moisture through the first half of the weekend. As an upper level trough of low pressure and an associated surface front move into the region on Sunday, widespread rain and thunderstorms can be expected. As far as any threat for severe weather, ingredients just do not look supportive. Some embedded thunderstorms are possible, however. The system will be a fairly efficient rain producer by January standards with many locations recording an inch or two. 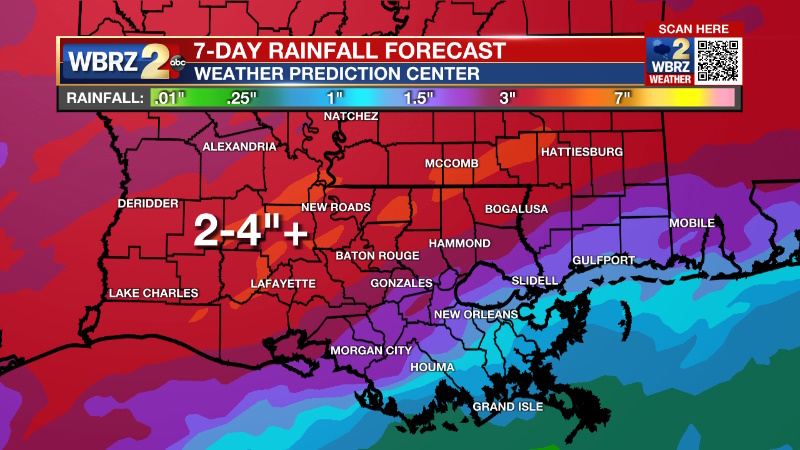 Repeat downpours in a short time period could lead to some isolat6ed nuisance flooding but no significant issues are anticipated. As the front stalls near the coast, upper level winds will stay out of the southwest all week essentially parallel to the boundary. With no significant dry air immediately behind the front, occasional showers will be possible through the middle of next week. Additionally, cool air will stay well back to the northwest so temperatures will be running just a few degrees above average. A more organized round of rain and thunderstorms will move through with a kicker front late next week.

When to evacuate
Evacuation procedural tips.

Pet care in disasters
Tips for evacuation of your pet(s).