A period of wet weather will begin on Thanksgiving and last through the first half of the weekend. As far as temperatures go, expect an extended break from the chill.

Next 24 Hours: The night will be largely quiet with light east winds, partly cloudy skies and low temperatures dipping into the upper 50s. Thanksgiving will start off dry but any sunshine will quickly fill in due to increasing clouds. As high temperatures reach the low 70s, a warm front will move north toward the coast causing a few showers to develop during the afternoon. A batch of steadier rain is expected into the evening and overnight. In fact, some of the rain could be heavy especially north and west of Baton Rouge.

Up Next: Periods of rain will be possible right through Friday morning as temperatures stop in the low 60s. A bit of a lull is possible later in the day but ample clouds will keep high temperatures in the upper 60s. A cold front will push into the region on Saturday with a final pop of showers and thunderstorms. 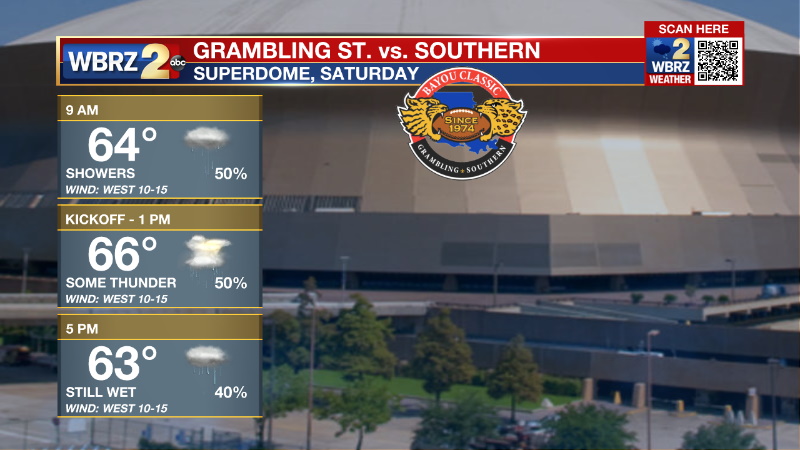 Clearing is expected overnight and into Sunday. All told, this system will deliver a healthy soak to the region with widespread rain totals of 2-3 inches. Once the front does pass, thermometers will barely dip with highs near 70 and lows near 50 on Sunday and Monday. CLICK HERE for your detailed 7-Day Forecast.

The Tropics: For the North Atlantic, Caribbean Sea and Gulf of Mexico, all is quiet. No tropical development is expected over the next five days.

The Explanation: A upper level trough of low pressure will dive south out of the Rockies and into the southwest on Thursday morning. This trough is going to get separated from the upper level steering winds and cut off over New Mexico and Texas slowing its eastward movement into the weekend. A warm front will move north toward the Louisiana coast on Thursday setting off a few showers. A period of steady rain will then be possible Thursday evening and overnight into Friday. Well above average moisture and upper level winds essentially parallel to the warm front could result in some training and a risk for heavy rain north and west of the Metro Area. To highlight this potential, the Weather Prediction Center has placed much of the area in a Level 2/4 Risk for Excessive Rainfall. While the front is expected to stall across the area on Friday, a lack of energy in the upper levels could mean a temporary lull in precipitation for much of the day while a low cloud deck keeps it gray and gloomy. A trailing cold front will move in Friday night into Saturday with a punch of energy in the upper levels leading to another organized batch of rain and thunderstorms. In terms of any severe weather potential, instability will be limited, though there is some concentrated to the far coastal LA region. A few strong to severe thunderstorms in areas closer to the coast is not out of the question.  Behind that system, surface high pressure builds in, so conditions quickly dry out and slightly cool down with highs returning to the upper 60s and low 70s Sunday and Monday.